On a Power Mac 7200 ,circa 1995, we began this web development journey. Because the movie is set in the 90’s they developed a period piece to match the times. Our site was lot like this gif/comic sans awesomeness. What was your first website like? 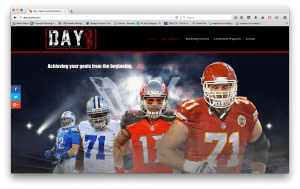 We’ve done a few sites for some of their clients, so we were eager to get to work on their own website. Day 1 Sports & Entertainment is a full service sports agency based in Atlanta. Day1 represents some very high profile NFL players, and is branching out into other professional sports as well. Like any good agency they get the best contracts for their clients but  it doesn’t stop there, they provide community outreach opportunities for their players to give back, as well as wealth management services to make sure their clients futures are secure.

The Day1 requested a website be developed that had the look and feel of the unique business environment of professional sports athletes. A bit of our WordPress movement skills were needed to showcase what these people do while highlighting a few of their players. Another fun site to work on and it’s pretty cool to see these guys at work on Sundays. 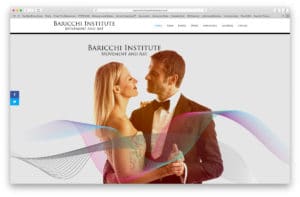 About 10 years ago we did a website for a nationally known dance studio that opened a branch here in Tampa. We gave the client the option of a Flash website, one that would allow us to use some animation and music to convey the movement and mood of a ballroom dance studio. The other option was a fairly new method of building a site, a fairly new platform (CMS) that we were playing with at the time, WordPress. You see, Flash was incredibly capable for building beautiful dynamic websites, but it was very difficult for our clients to update things such as events and schedules (something a dance studio would need often). The client chose to go with the Flash site. On the up side we did a beautiful site. On the down side it wasn’t long before they needed weekly and sometimes daily updates to the site. Now there were ways to get Flash sites updated by having Flash pull from a text file (xml) but it still had to be handled by us.

This was a turning point for us,  we were smart enough (and lucky!) to see what the future held. With SEO turning away from keywords and metadata to an algorithm that relied on frequent and relevant content, and the constant problems with the monster that Flash had become, we decided to jump headfirst into developing WordPress websites.

So why are we telling you this? Well, one of the principals of this dance studio was a world champion dancer named Luca Baricchi. He remembered the site and everything we went through to get it just right. Jumping ahead to the present Luca was developing a unique approach to the techniques, training and educational methods of classical dance, and was establishing a new institute. Luca hadn’t been to the USA in some time but we were honored when he flew in from Italy, just to meet with us. He wanted the fluid and graceful feel of the Flash website but needed the infrastructure of WordPress to allow him to grow as his institute did. We always missed the freedom of design and animation that Flash served. So we’ve been sharpening our skills to marry that freedom and functionality into one site platform. We also designed a logo to match the feel of what Luca’s techniques and spatial 3 -dimensional movement..  Be sure to have a look at the results.

WordPress development sees it’s next iteration with 3.6, beta it if you want to play, or just preview the next set of features, including improved audio/video support and a new cahced auto-save feature, never lost that in-progress post content again.

Check it out at WordPress

Preview: Gulf Coast Jewish Family & Community Services or GCJFCS presented us with a “massive” rebranding problem: take six existing, well established branches of their services, all with different branding, and house them under one umbrella.Â  We created a multi-site environment which allows each branch a separate control panel for content development and presentation while allowing an overall administration to the main organization.Â  Although the subsites are still in the process of building out their content, the main construction is complete.Â  We are currently developing a cohesive set of logo’s that will further tie the branches together visually.Â  Stay tuned…

Tampa based Cobra Technologies established in 1995, is a US based consulting and software product company with expertise in content management and document capture(scan). Massive Ant completed a full website redesign as well as branding and logo update. We provided a custom content management solutions to fit their needs as well as secure client areas.

Archiva Images images offers custom stock image portfolios for businesses looking to avoid having to customize imagery to fit their needs and avoid a generic look and feel to their marketing materials. We’ve created a customized private back end that enables graphics departments or any employee to access imagery specific to their company and have it easily available in multiple formats and sizes to suit specific needs, whether it be for corporate websites, emails, presentation, or print. Clients can batch images and save sets or email images to others directly from the website for distribution.

Pinellas Opportunity Council, Inc., Youth Arts Corps, and Jim’s Harley Davidson, team up to foster entrepreneurial understanding in St. Petersburg, Florida’s low income students by creating a hands-on environment for students to transform their ideas into a revenue stream. Keeping a motorcycle theme, leather goods are “up-cycled” by the students who add their own styles and fashion to donated products which are then offered for sale with proceeds going back into the program.

Heather McAdam, who has starred on NBC’s Sisters and Beverly Hills 90210, having coached privately for years has opened her long awaited acting studio.

Children’s book author Christine Tortorella came to us with her latest project and realized that a website can be much more than just a simple portfolio.

Reggie decided it was time to update from his Flash site to WordPress to take advantage of WordPress’ search engine friendliness and ease of adding to his portfolio of demos. Whether audio only or video, Reggie now simply uploads his demos to his Youtube account then embeds them directly to his website.

Clean and out of the way is how we design for our fine art clients, it’s the artisits work we’re showing off, not ours. Â Eric required a functional intuitive interface design that could handle the variety of projects in his portfolio.

A unique site for Geometric artists. Â Geoform.net is a highly interactive database driven Flashâ„¢Â website that displays a random array of artists images and interviews while allowing for infinite search options and listings. Â A Flashâ„¢ based custom CMS was created for Geoform driven by XML files generated from a custom FileMakerâ„¢ application. Â Handling infinite images and an immense amount of data while presenting a clean user friendly website was the goal set by Geoform, we’ve been told we beat that goal.

Alex requested a database driven FlashÂ® site that he could manage. Â We created a custom FileMaker interface that allows him to edit and export a single xml file.

Grain Pictures needed a simple way to display their work that would allow for them to easily self incorporate their work. The sites administration panel enables them to quickly embed video from their HD Vimeo account.

Syndicated Radio show Diggin’ In The Crates (ditc radio) has a new home. Live chat while they’re on the air, video galleries, podcasts, survey’s and more, they’re “diggin'” it.

Tampa’s premiere on-line alternative lifestyle community.
Looking for an alternative, that did not exist, to the same old bar scene and technologyâ€™s proliferation of stunted communication through way too many on-line hook up sites, founder Robert Geller, with the support of his dear friends (Lisa, Rani, Brian & Travis) set out to create a new social normâ€¦Outings & Adventures, the new place for fun. Facebook integration, event planning softwatre, e-commerce for events as well as products, this site has all the bells and whistles. UPDATE: O&A is now smartphone enabled for Iphone, Android, and more!